How does it work?

Since the Testing Framework was written in Python, the use of this structure consists of creating scripts which have a concise pattern based on execution and printing result. Therefore every plugin should implement two mandatory methods that are called by the main function of our system. Moreover, given the need to parametrize the test, it is also possible to catch a file in JSON or YAML format which will be instantiated as a dict or a list in Python code.

To run a custom test, we type:

The following image shows how the execution flow of a test works with its plugin. 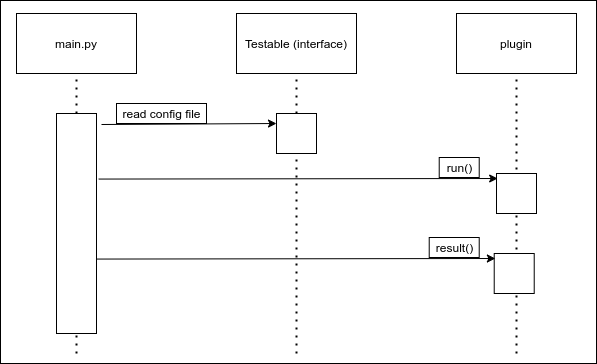 This flow consists of the following steps:

The output of the Hapi translator can be verified with a linter. The linter's main functionality is to check whether an YAML file containing policy rules follows the Cyral schema. To do that the plugin uses the [PAJV][1] validator, which given a mount schema, checks if a JSON/YAML file conforms to the schema. This script requires a configuration file as shown below:

File paths in the configuration file are relative to the <config_file>. Using the workflow to explain this script, we have run calling PAJV for each policy file with the same schema. At each iteration, responses are stored and at the end of the testing process the framework formats and prints a log in the standard output. Commands to run this example are available [here][2].